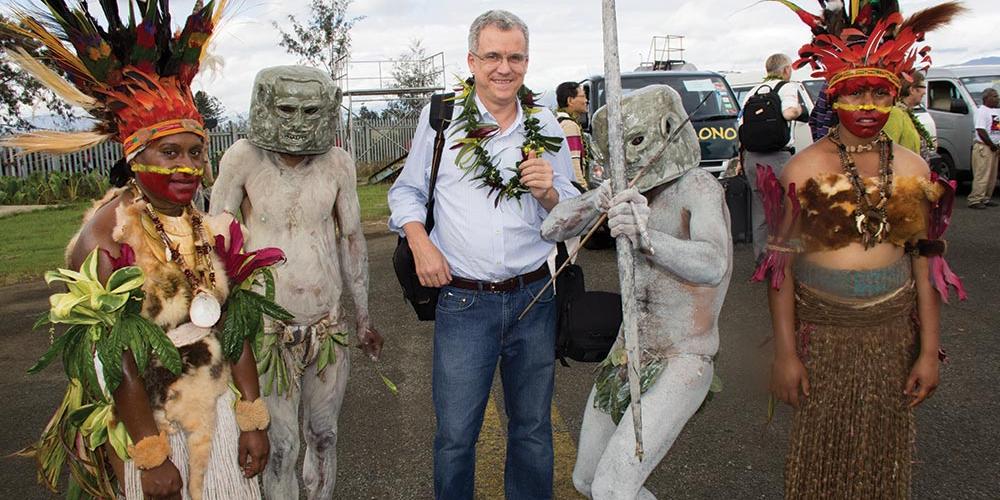 Many prayers have been offered in planes landing in some of the remote mountain airstrips in PNG, which test the most seasoned of pilots.

How inspiring it was earlier this year to help celebrate 50 years of Adventist aviation in Papua New Guinea (PNG). As a child in New Zealand and Australia, I would pray with my family every day for the missionaries in the islands of the south pacific. At camp meetings I would sit on the edge of my seat listening to amazing stories from “real-life” missionaries Len Barnard and Colin Winch. These men pioneered Adventist aviation in PNG, and with their small planes, they were able to quickly take the gospel to villages it would have taken weeks to reach on foot.

Now, many years later, I was privileged once again to meet these men of God in the very country where their dedicated service has brought help and healing to thousands.

In 1962, Pastor Barnard, his friend and filmmaker Eric Were, and 35 other men carrying equipment, medicine, and other supplies, took a 40-day trek into Karimui—the site of tree-dwelling cannibals. “The filth, degradation and their dejected stare of hopelessness defied description,” he later wrote. In his book Banish the Night, he describes the visit: “Besides the ever-present mud and rotting rubbish we smelled the sickly sweet odor of human flesh of the dead drying in the sun.” Talk about unentered areas! Today mission planes make the trip in 30 minutes and thousands of believers find hope and joy in their Christian faith.

Of course, aviation is not without its risks. Many prayers have been offered in planes landing in some of the remote mountain airstrips in PNG, which test the most seasoned of pilots. Unexpected equipment failures, bad weather—any number of variables add to the risks of flying.

It was a pleasure to meet Mary Lane Anderson at the celebrations. She and her husband, Les, served as American missionaries in PNG, and Les headed up Adventist Aviation Services. Tragically, on May 3, 2002, his plane crashed about 20 miles south of Goroka on a routine flight from Karimui—the place that Pastor Barnard trekked to so many years before. Despite this catastrophe and other bitter experiences, Mrs. Anderson returned for the 50th year commemorations, during which she sang a beautiful song of praise.

Thank you for your continuing prayerful support of Global Mission around the world. At times the challenge looks too great, the obstacles too tall, and our resources too little. But we serve a great God who longs to see the good news of salvation spread to all corners of the globe.