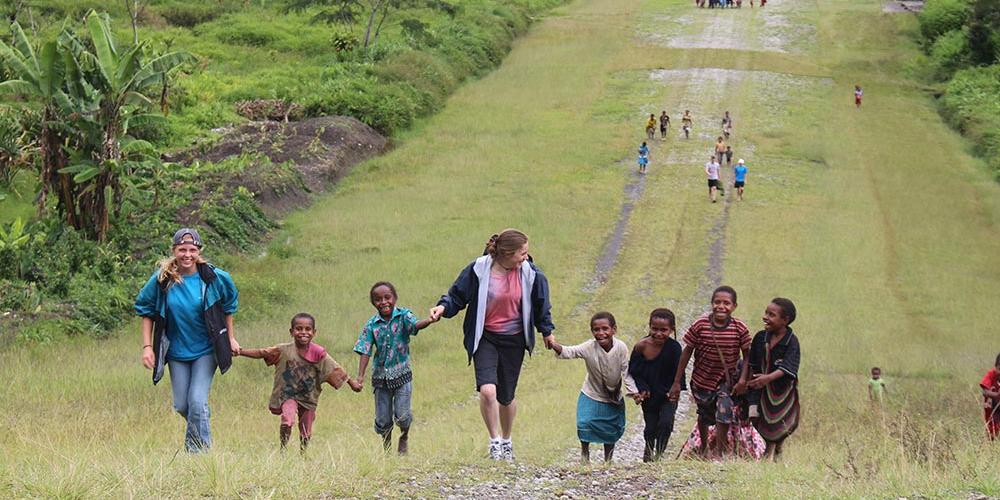 The Church From the Sky

Getting four young adults to a remote jungle village accessible only by plane to build a prefab church isn’t the easiest thing to do in the world.

Getting four young adults to a remote jungle village accessible only by plane to build a prefab church isn’t the easiest thing to do in the world, especially when you have only five days to prepare for their arrival. But I was grateful for the challenge.

Adam, Seth, Tiara, and Sierra were coming to Indonesia from the United States to build a church for a group of believers who had come to know Jesus through the ministry of our Global Mission pioneer Hermanus.

They arrived on Friday morning, just in time to gulp down breakfast, grab a shower, and help me weigh, load, and deliver supplies to be flown to the building site.

Hermanus and my sons Aubrey and Andrew flew to Walma ahead of us to start laying the foundation. Walma is the “point of no return” as our Adventist missionary pilot, Gary Roberts, likes to call it. Once the plane departs, you’re dependent on two-way radio for contact with the outside world.

When the team and I landed Sunday morning, we were warmly welcomed by the villagers, who joined us for the treacherous hour-long, 1,200 foot descent to their village.

When we finally arrived, it took about 20 minutes to convince the congregation to disassemble the shelter they had called their church home for the past two rainy seasons. We assured them that they’d be worshipping in a beautiful new church the next Sabbath, but I could tell there were doubters among them. Tiara receives a warm welcome. Everyone was eager to help!

I gave instructions in Indonesian, English and mime. “Level the land there.” “Dig a line of holes here.” “Put a stack of rocks and sand there.” It was pouring rain, but soon we had the holes prepared for the 24 pillars that the building would rest on.

Monday morning our team poured cement while the villagers went to pick up the 1.2 tons of metal pieces that had arrived by plane. One man carried more than 110 pounds of roofing down the impossibly steep trail! When we’d completed our tasks for the day, we went to explore the local swimming hole.

There’s an amazing story behind this swimming hole. When I came to Hobotonggo several months ago, I asked the villagers to provide sand and gravel for the building project. They searched for them, but found only large stones. So they prayed, and within minutes a small landslide occurred near the swimming hole.

“Pastor,” they told me excitedly, “we prayed, and God sent some of His pavement mixed with sand and gravel from heaven!”

On Tuesday, we put up the pillars. Many of the villagers, tired from their exertion the day before, watched in awe as the basic shape of their church quickly came together. Seventy-year-old grandmothers and grandfathers clicked their tongues and softly chanted “Thank you! Thank you! Thank you!”

On Wednesday and Thursday, we put the sidewalls and trusses in place. Then on Friday, we divided into teams—two working on the roof, one building a rock wall around the church yard, one building scaffolding, and another carpeting the ground inside the church with sand from the landslide. Excitement was in the air. The grandmas danced like David before the sanctuary, praising God for a church nearly completed.

On Sabbath, we had a wonderful worship experience. We shared testimonies of God’s guidance during the week and listened to praise songs that few outsiders have ever heard. I preached a sermon on Hebrews 11, mentioning that our Global Mission pioneer could be added to the list of characters who had great faith in God. Hermanus once had been left for dead when locals became angry at his teaching.

During an afternoon hike, I took mental notes of the congregation’s needs—solar panels and a battery setup to provide light for evening worship, a toilet because the hole over the creek was insufficient to accommodate the growing membership, a pastor who could live in the area, and someone to teach economic development, gardening skills, and Bible classes. My list went on and on until I felt overwhelmed, because beyond the next mountain and the next lie a thousand more such villages that don’t even have a Global Mission pioneer to share Jesus with them.

On Sunday morning, the villagers accompanied us on our climb to the helipad. We talked for a few minutes while we waited for our plane, and they gave us gifts and hugs. Then they built a fire and danced around it with delight, chanting “They’re awesome. They’re awesome! These folks from far are awesome. Thank you for bringing us a church from the sky!”

Pastor Darron Boyd is the Adventist Mission and evangelism coordinator for the Papua and West Papua Missions in Indonesia.